What Michael Phelps can Teach us about Business 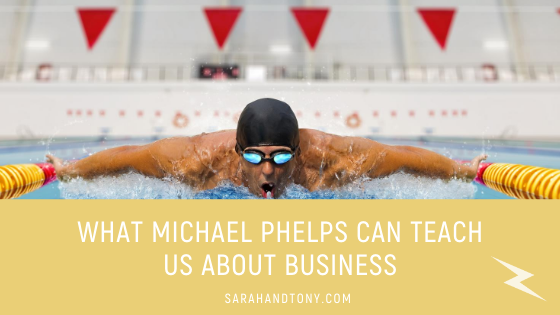 In this post we’re going to share with you what we believe Michael Phelps can teach you (because he did us) about business.

See, in competitive sports great coaches know that going back to basics, the simple things, doing them day-in and day-out and doing them well, is one of the keys to creating a winning athlete or a winning team. They know this and encourage it in their athletes — daily.

It’s not so different in business and in marketing.

We also need to get back to the basics and do the simple things well, do them daily and do them consistently.

It’s when you get those basics in order and you don’t make your goals negotiable, that big results build and the success begins to come your way.

It’s not always about the big launch or the big event, although those can be the things that bring huge momentum, it’s not solely about the results but instead, the action. For example, let’s take someone like Michael Phelps. Someone who has more Olympic medals than anyone in history – He didn’t wake up a few months back and decide, “I’m going to swim in the Olympics and get lots of medals!”

You can probably relate that to being an entrepreneur and waking up one day and deciding you are going to have a million-dollar launch for your new product or program, right?

Michael Phelps has been swimming for years, for almost his entire life. He started with the basics – learning to swim, practicing, small meets and competitions, then, state, national, international and then his the Olympics – where he was known, but not the way he reigned superior like he did.

Look at your business in the same way. Understand that if you get the basics under your belt and you practice daily, giving it your best, you will begin to rise above the competition, in fact you probably won’t even see them as competition.

It’s not likely that it will happen tomorrow, but while your waiting for that success to strike, why don’t you keep doing the basics and see where it can take you?

And, if you are ready to dig in and learn some of the most important pieces of the entrepreneurial basics, join inside our Influencers Hangout.  You’ll get everything you need to build a relationship type business and you’ll find out how to get the basics right and how to make it such an easy part of your day, you won’t be able to help but succeed.

Build a successful business? (things we say to ourselves daily)

What basics are you missing? Surround yourself with the doers, the action takers and the leaders that align with you, your mission and your ultimate goal. We’d love to help you get there too!

If you haven’t already, be sure to join our Facebook Group — Influencers Hangout — This is a place for network marketers who want to learn how to use social media the right way to grow their business! Or in the mean time, learn a little bit more about who we are and why, we believe in ‘Breathing Life into People‘.